Count your blessings, name them one by one...

In the pleasant after-glow of a long weekend focussed on family, feasting and fall colours, my thoughts have been drawn to a philosophy of thankfulness. When I dropped my 4 year old grandson off at preschool this morning, he kicked an old penny that was lying on the ground. I don't think he even recognized it as a penny - it was just something underfoot that had no more value than a pebble. Ever on the watch for teachable moments, I, however, stooped down and picked up the tarnished penny and declared it "a lucky penny". Suddenly his eyes lit up and he was most interested in it. It wasn't worthless, after all but a treasure!

That got me thinking about the penny and the way we attach value. In Canada, we stopped producing the penny on May 4th, 2012 and circulation of the penny as a unit of regular currency will cease on February 4th, 2013. Ironically, this will likely mean that the value of the penny will actually increase (over time) as it eventually becomes a relic of a bygone era. And I've noticed that lots of people are gathering up the soon-to-be "worthless" coins so that they can cash in before the toll rings on February 4th. Surely lots of coins will be left behind - stashed away in drawers, lost in the creases of couches, rolled up and ready to take to the bank but forgotten in the rush of more pressing matters. Over time they will somehow be dispersed, ending up in landfills or buried in the rubble of a restless age.

It's tempting to do a bit of research on the history of the penny, but that's not really where I want to go just now. Suffice to say that the penny will fade into the recesses of our collective imagination as well as becoming an artifact for archaeologists of some future age to un-earth. Sayings like, "a penny saved is a penny earned", or "a stitch in time saves nine" will perplex our great great grandchildren. How will we describe someone who values frugality when the term "penny pincher" is rendered obsolete? How will we describe something that is expensive when we can no longer say that it "cost a pretty penny"? Thoughts will clearly be worth more than a penny, but to say "a nickel for your thoughts" doesn't seem quite right. Ok - I'm chasing another rabbit trail...!

What I really want to talk about is the fact that we attribute value to all kinds of things - in fact, it may be fair to say that we attribute value to virtually every kind of thing: from coins to art to "stuff" to people. I suppose we could say that every thing that we can attribute value to, already has some value of its own - some intrinsic value. After all, if it's something that we can name - whether an object, a person, a thought, an experience, a relationship - it has identity and therefore value. But it is the value that we add that really counts.

After dropping my grandson off this morning, I had a half hour drive. Much of that drive was on a brand new highway and I marvelled at the engineering ingenuity that has gone into carving this new highway through forest, field and rock. On another level I marvelled also at the amount of money that has been invested in this project, but that's another rabbit trail and I shan't run down it today.

Even though it's a damp day, I also was completely awe struck by the beauty of the fall leaves - a canopy of yellows, reds, oranges. But then my mind went to friends, colleagues, and the countless people that I don't even know, who are today so burdened down with worries and concerns of all kinds that they can't even take note of the beauty around them. My heart and mind are filled with thankfulness and as I think about it, I realize that I am (and most certainly should be!) thankful for that. That is, I'm thankful that my life right now allows me space and time to think such thoughts.

One of the headlines on the news this morning is the story of the 14 year old Pakistani girl who was shot in the head by the Taliban for her thoughts and actions that promote education. That's a jolt! A startling and unwelcome intrusion into my reverie of thanksgiving for highways and fall vistas...

The fact is, life is all about shifting perspectives and cultural landscapes. We are thankful - or resentful or angry or self-absorbed or outraged - in a particular context. I'm sitting at my desk watching leaves fall from an especially beautiful maple tree. And I'm thankful that I have the luxury of even noticing such a thing. I realize that most people in the world have other things - more pressing and more practical things - on their minds today. For a great many of them the first priority will be to find the means to get enough food together to feed themselves and their families. For some, the priority is nurturing their failing health so that they will see another day. For some - like Malala Yousufzai in Pakistan, or so many other young and old activists - it may be how to advance a particular cause. I'm reminded that we see through a glass darkly (1 Cor. 13:12). And I'm thankful that in the blur that is life, I'm granted brief glimpses of a beauty and a value that transcends space and time.

Here's a quote that sums it up:

If you have food in your fridge, clothes on your back, a roof over your head and a place to sleep, you are richer than 75% of the world. If you have money in your bank, your wallet, and some spare change, you are among 8% of the world’s wealthy. If you woke up this morning with more health than illness, you are more blessed than the million people who will not survive this week. If you have never experienced the danger of battle, the agony of imprisonment or torture or the horrible pangs of starvation, you are luckier than 500 million people alive and suffering. If you can read this message, you are more fortunate than 3 billion people in the world who cannot read at all. 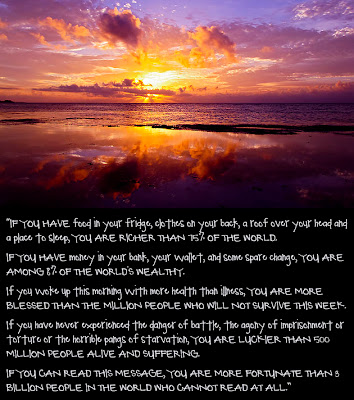 Count your blessings, name them one by one... and be thankful! And then, share what you have with those who have less...

Today I am being chased by depression and sadness and through my devotions this morning and now your reflections I am again reminded of the things that are of value. I am a Child of the King and He is in control. God Bless you this day also as you "Couynt your Blessings"
Susan Phillips (pastors wife here in Wilmot NS!!!!)