The (Artificial) Tree of Life 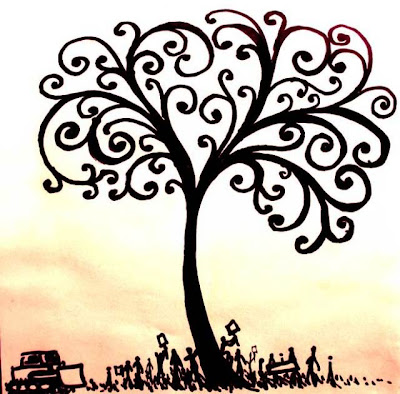 When Adam and Eve had succumbed to the temptation to eat fruit from the tree of the knowledge of good and evil, God’s punishment was swift and irrevocable. After God confronted the embarrassed pair with the fact of their fateful disobedience, he cursed the serpent and the earth and pronounced a new everyday reality for Adam and Eve. Life would be hard - the price they paid for a moment's surrender to temptation was higher than they ever could have imagined. And then he banished them from the Garden SO THAT THEY WOULD NOT HAVE ACCESS TO THE TREE OF LIFE. The picnic was over!

Humanity was thus pushed – literally pushed - out from the place of God’s provision, to a whole new reality where they would need to rely on their own innovation and creativity in order to survive. Humanity was no longer – or at least, so it must have seemed to them – under the protection and provision of a gracious and loving God. Humans were compelled to make their own way in the world. They had to rely on themselves and their resourcefulness. Life was going to be difficult, painful, hard. And God, though "an ever present help in trouble" (Psalm 46:1), was no longer their companion in a well-watered Garden.

Blocked from access to the precious tree of life, they first settled into the labor of food production in an inhospitable physical environment. By the sweat of their brows and the diligence of their hands, they constructed shelters, dug wells, planted gardens, made clothing. They established their lives as refugees from the Garden. But as time went on and they had adjusted to the new rhythms of life, they began a new project. They set to work to construct a new tree of life - an artificial tree – a masterpiece of their own effort and ingenuity.

Of course God was not oblivious to their efforts. I wonder if he was amused – even proud – of their efforts to build abundant and prosperous lives for themselves and to compensate for illness and decay and death by learning anatomy, physiology, the healing power of plants – and much later, synthetic medicines and treatments. To recover some of what had been lost when the gates of the Garden shut behind them.

We know he wasn’t impressed when the peoples of the earth got together to build the Tower of Babel; something, by the way, which has always puzzled me. How I long for a spirit of collaboration and cooperation these days as we consider the state of global economies and ecologies. A little pre-Babel collaboration would go a long way to defining and perhaps attaining a modicum of justice – or at least that’s the way it seems to me.

But I’ve been listening (again) to Viktor Frankl’s 1946 book, Man’s Search for Meaning, which chronicles his experiences as an inmate in German concentration camps during the Second World War. It’s a disturbing book insofar as it examines the primal theme of existence in the face of suffering and inhumanity and addresses the question of why, in such circumstances, some survive and others do not. As a psychiatrist, Frankl favours a scientific answer, though his own experience, one might argue, defies such rational reductionism. He states bluntly, for example, that the “best” inmates did not survive because they were not willing to do whatever it took to ensure their best odds. And yet, in recounting his experience, he describes in convincing detail, the way that “fate” determined his course. He was about to attempt an escape – on several occasions – when some incident thwarted the plan and in retrospect, the aborted plan led him through the door of survival.

Perhaps it was simply fate, or perhaps God protected him. This latter position, however, raises the uncomfortable and unanswerable question as to why God would protect some - and not others - from the gas chambers or from death by disease or starvation. The conviction which I have as I listen to Frankl’s audiobook though, is that despite the distractions of life, what really matters – the only thing that matters! – is our character. Or, put another way, our training in righteousness, a matter which unfortunately attracts little attention in the hustle and bustle of post-Babel life.

So, we may long for a spirit of cooperation and collaboration as we envision an end to human suffering and depravity, but the only thing that we actually have some control over is the state of our own heart in relation to a mysterious God. We can pour our energies and time into the “artificial tree of life” project – that is, manmade efforts to secure eternal life by our own efforts – or we can surrender our heart, mind, soul and strength to this God who promises us that if we will submit to Him in ALL things, He WILL direct our paths (Proverbs 3:5-6).

Can I lay down my plans and ambitions and learn to trust God to show me what to do and what to think in ALL things?