Walking on Water: What kind of leadership lesson is it? 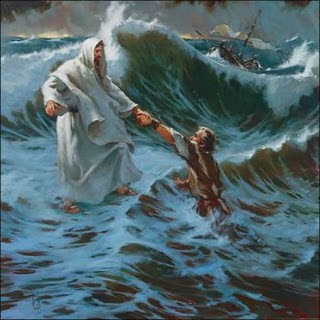 Thirty odd years ago I was a pretty serious athlete. I had a field hockey coach who would stop a drill with a blast of her whistle and we'd all freeze wherever we were for what she liked to call, "a teachable moment". Teachable moments were opportunities to learn from one another's mistakes. It was never very rewarding to be the one who made the mistake, but we all came to value the teachable moments as vital ways to strengthen the team. I think that Peter provided the disciples with a number of "teachable moments".

I’ve been thinking about the story of the night Peter walked on water (see http://www.biblegateway.com/passage/?search=Matthew+14%3A22-33&version=NIV). It’s one of those stories that’s so familiar, I wonder what I might be missing. Jesus has just fed the multitudes (thousands of people) with a little boy’s lunch of two fish and five loaves. After everyone has eaten their fill, the disciples gather up the leftovers – twelve baskets full! The crowds wander off, I suppose in different directions to return to their homes and Jesus insists that the disciples set out by boat to cross the sea to Gennesaret. They shove off and Jesus goes off to the hills to pray.

I imagine that they’re tired but maybe energized by participating in a miracle – I think that I would be. And at least some of them – the fishermen among them - would feel at home on the water. But as is sometimes the case on the Sea of Galilee, the wind picks up and before long the boat is being battered by the waves. Even fishermen can be intimidated by rough seas. There they are, hanging on for dear life, trying to keep their fear at bay, senses on alert. It’s dark. There’s water everywhere. They’re soaked to the skin – scared. And now, to top it off, there’s a ghost – or something – coming toward them on the water. I think we sometimes rush through this part, but we need to understand – they are terrified – absolutely terrified.

So first question –why didn’t Jesus just meet them in Gennesaret? Why was it necessary for him to meet them in the middle of the Sea? There is clearly something for us to learn from the encounter that follows. Peter – brash, act now - think later - guy that he is – is perhaps anxious to disguise his own fear. Maybe he overcompensates and, as is his nature, gets himself out of the proverbial frying pan and into the fire. Others might be relieved to have Jesus join them in the boat, calm the winds, reassure them - "thank God you're here... we were so afraid!". But Peter has never been content with the easy path. No. He’s a take charge kind of guy. He needs to stand out, make a splash, so to speak. So he challenges Jesus to call him out of the boat so that he might demonstrate his spiritual maturity - teach his fellow disciples a thing or two about real power and faith. Peter wants to walk on water. He wants to defy the laws of nature. For sure, no one could accuse Peter of being timid, or of hiding in the crowd. And when Jesus calls him out of the boat, he doesn’t ease himself over the side – he jumps out!

So the way I’ve always understood what happens next is this: Peter starts out strong - confident. He’s actually walking on water – one step, two, maybe three or four – but then he starts to think about how amazing it is. Or maybe he suddenly realizes how foolish he’s been – sure he’s walking on water but the waves are REALLY big. The fear rises up and he begins to sink. He calls out to Jesus – “Master, save me!” And Jesus does. He grabs his hand and pulls him out of the water and the two of them climb aboard the boat. Only then do the winds subside.

The lesson, I’ve always thought, is that we can do amazing, incredible, miraculous things, when we’re willing to take risks – when we jump out of the boat and keep our eyes on Jesus. But today I’m wondering if that’s a lesson that is culturally biased. Maybe it’s the WRONG leadership lesson to conclude from this story.

Maybe Jesus humours Peter’s request – Lord, it sure would be cool if I could walk on water – or, to get to the underlying principle, a few miracles would greatly enhance my reputation - only to teach him to know the limitations of his humanity. What if Peter had made it all the way to Jesus and then back to the boat – or even to the shore? What if he was able to walk on water any time he wanted to? Would this have indicated his ability or preparedness for pastoring Jesus’ church? Did Peter fail a test that night? Since Jesus ultimately said to Peter “on this rock I will build my church” it seems clear that Peter didn't fail, and yet we tend to think that if we are going to be effective leaders, we ought to be able to walk on water.

Maybe we’ve taken the wrong lesson from this passage – maybe, in fact, we have too many leaders who have learned how to walk on water but have forgotten to call out to God, “save me”.

Self-reliance – something so highly valued in our culture - may actually be one of the biggest hindrances to the growth of the kingdom. When we're looking for the lesson for us in a teachable moment, we need to be careful of our cultural biases and make sure we're getting the intended message. God did not call Peter to walk on water and he doesn’t call us to. We are NOT Messiahs. The miracles - then and today - are God's miracles, performed for His purposes. We may have a front row seat, or even be in the spotlight on centre stage. Heck, it may even look like WE'RE performing miracles. But when it comes to leadership, here's the bottom line: We are not building our own kingdoms, but God’s kingdom and we’d best not forget that.