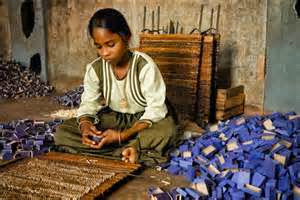 If you're like me the thought of child labour probably makes you cringe. I envision something like this photo shows: a young child spending hours every day in repetitive (and sometimes dangerous) work. This image violates my sense of justice because I believe that the child is being ruthlessly exploited. He or she is forced to work in order to help the family survive, or - more horrifically - because they have no family and are working for their own survival or are the "property" of a ruthless "employer".

I understand that the working conditions for many child labourers are entirely unsatisfactory and even inhumane. I'm shocked by the images I occasionally see on news reports when a factory collapses in Bangladesh or fire rips through a garment factory in Pakistan. I wonder how it is possible that such conditions could exist in the 21st century. Child Labour becomes the catch phrase for that which I despise.

But is the labour of children always bad? The International Labour Organization (a specialized agency of the United Nations) says this:

Not all work done by children should be classified as child labour that is to be targeted for elimination. Children’s or adolescents’ participation in work that does not affect their health and personal development or interfere with their schooling, is generally regarded as being something positive.

They go on to say that "the term 'child labour' is often defined as work that deprives children of their childhood, their potential and their dignity, and that is harmful to physical and mental development." I can't help but think that our understanding of what might be harmful to the physical and mental development of children is heavily influenced by our culture and specifically - in the western world - by our affluence and the way this has fundamentally shifted our view of many things.

In Canada there are regulations that define appropriate conditions for youth labour (see http://www.naalc.org/migrant/english/pdf/mgcanchl_en.pdf). Each province has guidelines that address questions like the age at which youth may legally be employed, the number of hours/day they may work, and the kinds of work they may (or may not) do. In most cases children and youth are expected to be in school until they have graduated and paid work must not affect their school attendance. This all makes sense, right? As a society we put a high value on having every child graduate from high school because we believe that a high school education is a minimum requirement for future employment and, ultimately, for success in the workplace and in life. But it hasn't always been so.

For those who grew up in rural areas of Canada, you may remember (or have heard stories) of children working alongside their parents in factories or fields, sometimes in addition to their schooling or sometimes for a season, instead of being in school. In the fishing community where I live, there was a time when it wasn't at all uncommon for whole families to move to a different community for part of the year and work together at a fish processing plant. The arrangement wasn't necessarily exploitative and one might argue that there was actually some value for the child in being part of this cycle. Or consider children who annually were expected to work in the potato fields or the blueberry fields during harvest time. This work gave them some income and taught them the value of manual labour AND of the connection between work and money.

Sometimes I wonder if my generation - the baby boomers - have overshot the mark. That is, in our efforts to help the next generation - our kids - succeed, we have tried to minimize their struggles. We want to protect them from the harsh realities of adulthood and provide for them a life that is carefree. But what has this approach yielded?

Are we raising children who have dignity and can realize their potential? Are they experiencing optimal physical and mental development? The evidence suggests - despite our very good intentions - that we have missed the mark. We have spared them from exploitation and from "growing up too fast", but I think we have to acknowledge that the current rates of childhood obesity, diabetes, and other physiological ailments as well as various psychological and behavioural disorders are alarming. And in terms of dignity, that's a harder value to measure, but I suspect that many of our kids are growing up in social environments that are extremely hazardous to their sense of who they are. We probably all know of kids in our communities who have been victims (or perpetrators) of cyber bullying of one form or another. Our high schools have too often become war zones where kids are exposed to every kind of temptation and debauchery imaginable and they too - like kids in factories in India or Pakistan or Bangladesh - are fighting to survive. Outwardly they may look like they have a great life - designer clothes, the latest technological gadgets, money to spend on entertainment and the latest fads - but appearances can be deceiving. Their struggles are not the same but in both cases, there are many dangers and pitfalls.

Of course I'm not suggesting that the solution is to put all our kids back to work. But I do think that we need to be careful of following the cultural drift toward ever-increasing self-direction for our children and youth. Kids need direction and guidance and even the occasional boundary. And in a secular society we can't expect or assume that they will get all they need in terms of moral instruction in school. I believe - and I believe it with more and more conviction - that children NEED to learn many things from their parents, grand-parents, extended families, communities and churches. A secular society has its limits.

But perhaps you're thinking that I'm comparing apples and oranges. Surely I can't be comparing the situation of a young child labourer in India today to the labour of Canadian kids a few decades ago or to the challenges they face today. These are totally different scenarios. And I agree that they are.

But here's the thing. We have a tendency to assume that the developing countries should learn from us and follow our example. So for me the challenge is to find the elusive happy medium - to vigorously and persistently advocate against the exploitation of children so that they may grow up with a sense of their value and with dignity. But we should also vigorously and persistently advocate against the conditions at the other end of the spectrum where we mistakenly think that we can keep our kids safe if we protect them from responsibility but inadvertently expose them to a brutal social environment. God help us to create societies where children can truly thrive and grow!

I appreciated your two points
-- that not all work done by children is bad: when Brazil initially outlawed child labour they left a large number of street children without any legal, sustainable option to fend for themselves. I think they sorted that out eventually.
-- and that our approach in Canada is often short-sighted. I am still waiting for our society at large to ask "WHY is our country so full of bullies?" It's obviously not just random but we seem to be afraid or unwilling to ask this question even when our "anti-bullying" programs are multiplying and the problem is not going away.