I wonder what Screwtape would say to Wormwood on the human aspiration to "make a difference"? 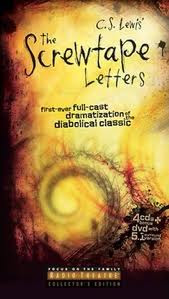 I've always been a fan of C. S. Lewis and especially of his book, The Screwtape Letters in which a senior demon - Screwtape - mentors his nephew - Wormwood - advising him (and cajoling him) in the ways of tempting "the Patient" to sin. Such a clever way to help us see and think about our assumptions concerning sin and faith and righteousness. These last few days I've been thinking about what Screwtape might say to Wormwood when it comes to our human ambition to "make a difference" in the world.

On first thought, "making a difference" seems like an honourable - maybe even an altruistic - ambition. I think of the assorted people throughout history who have made a (positive) difference in their time and place and I'm grateful for their impacts. In fact, I've so admired people who have made a difference that I've imagined myself as someone who might someday and in some way, make a difference too. And I love to surround myself with people of all ages and abilities who also think that way. Not that I - or any of the people I'm thinking of - have grandiose schemes or plans, but I love it that we can aspire to something that goes beyond ourselves. It IS noble, I think, to have that kind of mindset and to take steps that move us in that direction - whatever it is. But even as I say that, and as I've been thinking these last few days about it - a yellow flag is raised.

There's been lots of cyber chatter this past week about the Kony 2012 campaign - for one example see http://www.facebook.com/groups/faithandjustice/316861761701783/ - and while you're there, feel free to join this Facebook group. I don't want to reiterate that discussion, but I do want to acknowledge that it's been a big part of my thinking on this issue of "making a difference". Jason Russell - the filmmaker who made Kony 2012 - wants to "make a difference". I quite honestly think that all of the people at Invisible Children are involved so that they can be part of the solution to the problem of the abuse and exploitation of children by the LRA. I've just watched a short video that they've put together to respond to some of the criticisms that have been directed their way since Kony 2012 hit the internet. You can find it here if you're interested: http://news.yahoo.com/blogs/envoy/invisible-children-defends-kony-2012-film-video-224446367.html. I can just imagine how hard it is for them to hear and read and see the kinds of attacks that have been issued. But this is all a bit beside the point of this posting...

All I really want to say is that maybe we need to be cautious when we talk about "making a difference". Maybe having the kind of "make a difference" mindset can actually set us up for some unhealthy distractions. I can just hear Screwtape telling Wormwood that it's a good idea to have us think that we can take on the enemy by having a good strategy that will make a difference. Mind you, I can also hear him advising Wormwood that if he can get his Patient to feel that nothing he does will make a difference - that's also a win for the bad guys. What Screwtape and Wormwood DON'T want to hear is the Patient committing to a life of faithful obedience to the commands and instruction of Christ in the way of kingdom living, come what may. I think THAT'S what we ought to be aiming for, most fundamentally.

I'm thinking of scenes from my childhood when we used to pick teams on the playground. Imagine that we're all assembled and the teams are being picked. Believe me, if I'm doing the picking I'd far rather pick those who are itching to get involved so that they can make a difference, than those who don't believe they can or will or should even be involved. But I also think that a team full of people committed to making a difference can be a pretty unruly bunch. Likely the first thing to be done is to have them all lay their plans and ambitions for making a difference down in order to be formed in the character of Christ.

I'm re-listening to Dallas Willard's book, Renovation of the Heart, and I'm reminded of Willard's emphasis on character - the inner being who is being shaped and formed by the Holy Spirit... for good works. It's not enough just to contemplate the character of Christ. But nor is it wise, it seems to me, to take matters into our own hands - to devise clever plans and strategies to accomplish good ends - and to plunge ahead with our campaigns for making the world a better place. Rather, if we can seek God and His righteousness - with all of our heart, mind, soul and strength! - maybe the changes we so desire will be the icing on the cake.
Posted by Lois at 2:31 PM