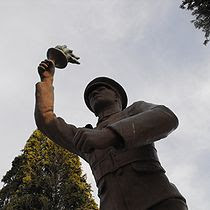 It was a stunningly beautiful fall day yesterday as a hundred or more of us gathered for the Remembrance Day services in my small community. I think that it was perhaps the largest gathering I can remember in the 24 years I've lived here - and it seemed that there were more kids in attendance too. That was encouraging. I know that as the veterans of the "war to end all war" have gradually passed from our midst, there has been some concern that we will fail to take seriously our responsibility to remember the sacrifices they made on our behalf.

I suppose that at every service in every community in every corner of this country, someone recited the poem, In Flanders Fields, written by a Canadian - Lieutenant Colonel John McCrae on May 13, 1915. Yesterday - as I pictured the row on row of crosses and the poppies bowing in the breeze, I was struck anew by the words:

To you from failing hands we throw The torch; be yours to hold it high.

It's a powerful image... But I got thinking about exactly WHAT the torch is and how we are to hold it high. There's the Olympic torch, triumphantly making it's way to Vancouver for the opening of the 2010 Winter Games, but that's a different matter. Is this a torch of freedom? Of hope? Of justice? Of victory?

What exactly is it that we are to remember? At the service I attended there was only one World War veteran in attendance - he's the only one left in our community. He placed a wreath on behalf of all veterans, walking carefully but with simple dignity to the monument, wreath in hand. He laid it - the first of many - took a step back and saluted - and wiped tears from his eyes as he returned to his place among us. I can only imagine the "remembrances" that were stirring in his heart and mind...

I always think of my grandfather on Remembrance Day. He too was a veteran. I can remember - as a child - asking him questions about the war as we did dishes together. I was standing on a chair, wiping the dishes as he washed. And I asked him innocent, childish questions, about the war. And you know, he never wanted to talk about it. I know that he was an ambulance bearer. Though I suppose this is my own image - filling in the blanks, so to speak - I suppose that meant that he would go onto the battle field to pull the wounded out of the fray and to the relative safety of a make shift first aid station. It must have been both dangerous and gruesome work. I really can't imagine. Probably it's no wonder he didn't want to talk about it. Maybe he worked hard to erase those images from his mind.

My husband tells me that years ago, when there were 30 or 40 vets still living in our community, most of them didn't attend the Remembrance Day service. Hm. Were they too, trying to forget?

A young man from our small community - 21 years old - is now serving in Afghanistan. We pray for his safety every week in church and I add an urgent plea that God will protect not only his body, but also his mind and his heart. And even as I pray, I confess that I have doubts that even God can protect him from images that he will want to forget.

I confess that in an ideal world, I would be a pacifist. Of course, in an ideal world, there'd be no need for war! But still, I long for peace and justice and a world where we all look out for one another. But that's NOT the world we live in and I suppose my pacifist ideals are naive. But as I look at the injustices - which I've spoken of often in these postings - I wonder if this is what the veterans of the 1st and 2nd World War really had in mind. Did they sacrifice themselves - their physical and emotional health - so that the victors might use economic carrots and sticks to dominate and exploit weaker countries to the point of intense suffering?

It seems to me that victory - and the passing of the torch - carries with it a responsibility to ensure that the ideals for which these battles were fought, are not lost in the shuffle. YES - by all means - let us hold the torch high, but let it be a torch of hope and peace and freedom and justice!

It is extremely interesting for me to read the post. Thanx for it. I like such themes and anything connected to them. I would like to read a bit more soon.