The Live it Out Challenge: It's all about living simply, justly and faithfully... 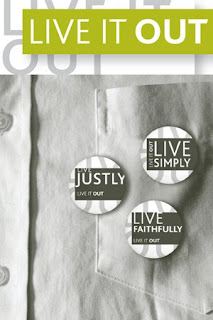 Well - the Live It Out Challenge has now been officially "launched"! This challenge is based on an idea that began to germinate about a year ago. If I had to say when the seed was planted, I'd probably go with four years ago when I went to Kenya for the first time on a short term mission trip with Canadian Baptist Ministries. In reality, I think it may be more accurate to say the seed may have been planted way back when I began to take sociology courses in university and those courses began to trigger a "sociological imagination". The trip to Kenya was just one of many opportunities to reflect on "big picture" ideas and observations. It tilted my thinking...

I also need to mention that way back when I was 13 or 14 years old, I - like so many teens - became pretty dissatisfied with "the church" - actually I was intensely CRITICAL. It just seemed to me that the church wasn't what it ought to be, if Jesus really IS who he said he is and if the church really is meant to carry on his work. If we're actually to be some sort of INCARNATIONAL presence of Christ in the world - a world that is indescribably beautiful (yet sometimes ugly), complex (yet simple), messed up (yet orderly) - in other words, a place of contradiction and paradox.

I was so disappointed in the church when I was a teen that I set out on my own to search for "truth" or "god" or something, ANYTHING authentic. At that time, if you'd asked me, I would have said that I believed in God but not much in any religious institution. As it turns out, even though I'd been to Sunday School and church pretty much every Sunday since birth, and THOUGHT I knew what Christianity is all about, there were actually some pretty significant holes in my theology. But I'm getting ahead of myself.

So - I spent about the next 14 years in a very diligent search - a spiritual journey that involved exploring other major world religions, practicing TM (transcendental meditation - it seemed like something a "self-actualizing" person would do - thank you very much Abraham Maslow!), dabbling in yoga, and so on. Somewhat to my surprise, that search brought me pretty much full circle back to Christianity.

Without going into detail, I found myself in 1992 with a husband, two young children, a PhD in Sociology, a renewed interest in Christianity and, surprisingly for me - the "church", and some time on my hands. From about 1992 to 2004 I became increasingly involved with our regional baptist Convention and then with Canadian Baptist Ministries in the whole area of public witness.

I guess I figured that if the church really IS supposed to somehow represent Christ on earth, rather than criticize it for its (many) shortcomings, I ought to roll up my sleeves and use whatever insights/resources/talents I might have to help out - to make the church more effective. Hm - as I write that it sounds pretty arrogant. Hm.

Anyway - in 2004 the trip to Kenya was a really important factor in my learning curve. And it was followed by trips to Bolivia, El Salvador, back to Kenya, then back to Bolivia and back to El Salvador. And in between all of these forays to low income countries, I was reading and thinking about justice issues and global realities and how Christians in countries like Canada and the United States should be living out our faith in the context of these realities.

It seemed that we often WANT to be totally committed to following Christ, but we've maybe lost our way a bit or the culture of affluence that is OUR reality, has blinded us to the fact that "our world is not THE world" (I think Rob Bell makes this point in his Nooma, Rich). Bottom line, as I've said through numerous entries in this blog - we can't continue to live the way we live and assume that there are enough resources to go around - it's NOT POSSIBLE for the whole world to live as we do and, if we REALLY want to love our neighbors as ourselves, it's time we figure out a way to stop using way more than our share of the earth's resources. I hasten to add that I am totally convinced that reducing our STANDARD of living does not mean that we will reduce the QUALITY of our lives. In fact, I suspect that we'll discover that reductions in standard will actually improve quality. But you can test that for yourself!

All of this to say that the LIO challenge is simply a tool to help you get started. The idea is that you: 1. make a commitment 2. figure out where you are now (that is, your starting point - the whole idea is to start where you are but not stay there!) 3. set some personal targets in the areas of living simply, living justly and living faithfully, and 4. find an accountability partner or small group - a person or people who will hold you accountable to stick to your commitment and to follow through on the targets you've set for yourself.

There's really just one rule: Don't get legalistic about it! This isn't a magic program - it's just a simple tool to help you take the next steps to a life this is more simple, just and faithful. So - what do you think? If this sounds like something that will help you, PLEASE, sign up. Just go to http://www.cbmin.org/cbm/live-it-out. Not only can you sign up online, but there's LOTS of resources here to help you get started and keep going.

By the way, if you wonder how any little changes you might make in your lifestyle could possibly make ANY difference to the global justice issues, think about this: you know have gas prices have been going up lately? Well, many people are making small adjustments in their driving habits - driving less, driving slower, etc. In the August 9-15, 2008 issue of The Economist (in a short article called Buttonwood, Fuel for Thought), it says this: According to the Department of Transportation, Americans drove 9.6billion fewer miles in May than they did last year." Wow! Maybe we CAN live more responsibly!

It is great to live simple, to do justice, to love mercy and to walk Humbly with God. The Church is called not only to preach by lip but by actions-feeding the poor,helping the widows and Orphans. I find the article both intriguing and inspiring. Keeep up the good work
Luke Tamu