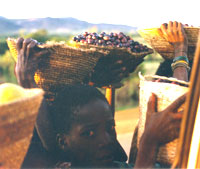 How do we wrap our minds around the stark reality that 826 million people in the world will go to bed hungry tonight while here in North America the diet industry is booming?

In the US alone, the diet industry is worth over $100 billion dollars, and that's per year! People are apparently willing to spend money—lots of it—to shed pounds, and the weight loss industry is laughing all the way to the bank.

It's not just the money—people go to absurd lengths to compensate for overeating or whatever else may cause one to be overweight— expensive diet pills and drinks, food and vitamin supplements, and even cosmetic surgery. And it's not just women and girls who diet or struggle with body image issues. Men are overweight and diet too. The sad thing is, there's a valid reason all this dieting. According to Stats Canada, in 1998, 47.9% of Canadians were overweight and "the estimated total direct cost of obesity in Canada in 1997 was more than 1.8 billion dollars." (from http://www.cbc.ca/news/background/fats/statistics.html). Contrast that scenario with this one: According to UNICEF, 30,000 children die each day due to poverty. And they “die quietly in some of the poorest villages on earth, far removed from the scrutiny and the conscience of the world. Being meek and weak in life makes these dying multitudes even more invisible in death.” That is about 210,000 children each week, or just under 11 million children under five years of age, each year. (from http://www.globalissues.org/TradeRelated/Facts.asp) It's an unsettling irony...

Great Blog! Will be linking this to my blog and exposing it to my community (Awaken - Calgary)

We are thrilled to be the first "hit" on your counter. We hope this will be an encouraging tool for you as you encourage us. Thank you and Marilyn for all your work.

Together may we all live out the Micah Challenge!

Hmmmm....
I have had some half developed thoughts rattling around my brain for the past few days (having heard Lois speak recently, she has to bear some of the responsibility for them, I think :) - not that they are her ideas, she just pushed me along the path to thinking a bit).

How can we trust the ethics of "western christians" (pastors, professors, theologians, writers, etc.) writing and thinking about how we should act and behave in the world broader world? I have read (a few of) the books and listened to the arguments. I like them for the let me off the hook most of the time. A little bit of guilt maybe, but not very much.

This is somewhat of a half developed thought for me still, but it seems to me that there is the risk that when the rich (I mean myself and others from the west) write and think about how it is 'ok' to be rich (even if we may be poor relative to the "rich") we become somethink like murders thinking up reasons why it is ok to murder. Maybe not the best metaphor, but I hope you get my point.

How do we get outselves far enough from who and what we are to fairly judge what is required of us in a world of pain, hunger, war and hurt. I don't know the answer, and I am not sure I will like it.

Too many thoughts, too late at night.

the contrast of hunger versus thin
is a wakeup call. But, there seems to me to be a "numbness" in all of us. We see pictures of the hungry overseas, and we read of the dieting that happens here, but we don't respond.

Or is it because it would mean we would have to change and we don't want to?

Finally, is it because we actually believe what is told to us in all the media about being young, and sexy, and being thin is all these things?

If, this is so, then no wonder this is a problem because we are the problem.

So, how do we stop being the problem? Any ideas?

I appreciate this discussion on so many levels.

I can not help but think of G.K. Chesterton's apt reply to a London paper's question: "What is wrong with the world?" Simply put, Chesterton wrote "me".

Our society (including the church) does a lot to stroke the "me" and often fails to see the much broader "WE". When we do, the circle never seems big enough. As if that nagging "me" keeps pulling us back, drawing in the perimeter. I wonder if it isn't all about fear. What if we allow everyone into the domain of our circle, maybe there won't be room left for me.

Maybe it just takes too much faith. Like the theives dilema: two theives are aprehended and brought in for questioning. The prosecutor has enough evidence to hold them both in jail for a short sentence (2 years less a day). But if he can get them to turn on each other it would be a different story. So, he seperates the theives.
He goes to each one and offers them a deal. If you turn over your partner and tell us what he did, we'll let you go free and he will serve the whole penalty (10 years). But if you both turn the other in, you'll both be found guilty and share the sentence (5 years each).

If the two theives could only put their heads together, they would know that the best decision would for each to remain silent and serve the lesser penalty (2 years less a day).

But the reality is, they are left with a choice of faith in the other person. Each might think, "If it were me, I would go for the chance of getting off free." Or worry, "if I do not squeel and he does, I will get stuck holding the bag."

And so the theif must chose based on his faith in or fear of the other man. How much of my life is based on fear? How much of the church?

I just re-read a paper by John Schneider entitled "Can Christianity Engage Consumer Capitalism" (published in a journal called Pro Rege, March 2005 - you can find it through google if you're interested). He talks about the inevitable limitations of a view that encourages us to distance ourselves from capitalism (through the living simply message of people like Ron Sider). He argues that capitalism is the best option for dealing with poverty and that affluence and enjoying the "good life" is not necessarily bad. He cites examples in both the Old and New Testaments of God's apparent approval of luxury.

But I don't know. It seems to me that the bare fact is that the planet cannot sustain the kind of life we have in North America. And it certainly can't sustain that standard for the whole world. So living simply and generously may not be enough, but I still think it's a good place to start.

I suspect that there may be some racism and elitism of other kinds at work in us. We enjoy giving, so long as it's on our terms. We like for others - the poor, for example - to feel grateful for our expressions of "generosity". Is this justice? How can we truly identify with the poor?

I read the four kennys and Lois's comments again. Fear and having the poor be grateful are 2 sides of a coin.

Most of us are not very motivated to do anything until fear kicks in and then we want to be praised for what took ud so long to do.

When I was a high school student, I really didn't study until I knew the deadline of a test was coming up. Then, I was motivated to study.
I moved mountains then. When, I did well, boy did I want to be praised.

But, it took the date of a test to move me into action.

My point here is that something has to impact us personally before we move.

Same thing with pesticides for lawn care. Until a teenager became sick with cancer and that it was traced to his being on lawns that had pesticides on them, was there action. This kid became the prime mover behind the movement to ban
lawn pesticides. He was from Quebec as I recall.

I think this is how child activists like Craig lilberger got things started. It impacted him when he saw images of child labourers, and then did he move.

But, the question becomes how long does it take before there is action, and in some cases the action is too late. Then, on tyhe other hand motivation has to happen at the right time and right place like what happened with Rosa Parks when she refused to give her seat to a white person, and then this sparked the civil rights movement in the U.S.