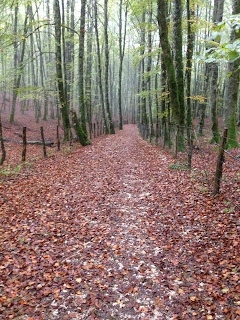 I’m fascinated by pilgrimage. For me the term connotes earnestness, persistence, solitude, inspiration, a touch of holiness. It’s rising above the mundane, a shedding of the constraints of the banal. Pilgrimage is both dogged pursuit and quiet surrender.

It’s estimated that over 100 million people go on pilgrimage journeys each year. They leave their homes and their everyday lives behind for a week or a month or longer to pursue an elusive goal of peace and balance and connection. They come from diverse backgrounds and they engage in pilgrimage for a variety of reasons, but in every case, it’s by definition a pause in their normal lives.

Some go it alone and others travel with a partner or small group. I know several people who are currently walking the Camino de Santiago – a roughly 800 kilometer route through Spain and France – the Way of St. James. I confess that I’m more than a little bit envious and I’m enjoying their journeys vicariously through Facebook updates and pictures. 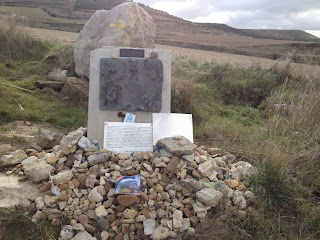 But it’s making me think…

A few weeks ago I met a pilgrim of another sort. He was born in Somalia and lived there until he was 8 years old when he left his home and his father (his mother had died when he was a toddler) and struck out for… somewhere else. He was a child. I don’t know who he traveled with exactly but I imagine that it was a group of relatives and neighbours, a group drawn together by desperation and faint hope. In any event, he arrived at a refugee camp in Kenya after a long and unimaginably arduous trek – 800 kilometers of determination and deprivation.

Most people might not immediately think of the flight of a refugee as a pilgrimage, but I do. This young boy then spent 12 years in the refugee camp before winning the proverbial lottery. His name was posted on the camp board listing those who had been selected by the United Nations Refugee Agency (UNHCR) to be sponsored by a foreign government to go… somewhere else. A promised land.

He arrived in Canada a few months ago and his pilgrimage continues as he learns how to live in another country and culture and language. 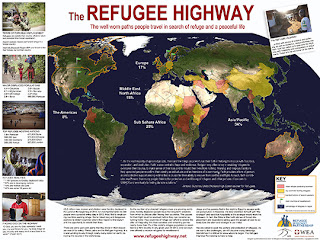 Both are pilgrimages and those who walk those well worn paths are pilgrims. Some of them are well clothed and well fed. They sleep each night in modest comfort and security. Others have the clothes on their back and are grateful for whatever scraps of food they can muster along the way. They walk in the company of other displaced souls, with only their prayers for security. The risks along this refugee highway are many.

To be sure, there are many differences between what I’ll call the “pilgrims of privilege” and the “refugee pilgrims”, but what they have in common, I suspect, is that they are all pawns of powers beyond their jurisdiction. They are buffeted by strong winds of anxiety, fear and dissonance and propelled by a glimmer of hope – hope that the life behind them is not all there is.

Refugees are fleeing some kind of oppression or persecution or deprivation: political, economic, physical, spiritual, and now also ecological (“climate refugees”). They are leaving an intolerable situation in search of refuge – a safe place, a sanctuary from the brutal forces that beset them.

Since its inception in 1950 the UNHCR has helped an estimated 50 million refugees start new lives in foreign lands. They come from some 126 countries around the world where life is not just perplexing but impossible. These uprooted and desperate people leave family, friends and all that is familiar behind. Those that make it to UN Refugee Camps are the lucky ones among the many millions more who are displaced and have no safe haven.

It’s pretty easy to imagine that these refugees are pawns of forces beyond their control – those who have fallen through the cracks of a globalized economic world system with its “winners” and “losers”. But what of the 100 million who can voluntarily set aside their responsibilities and routines to embark on a short term pilgrimage?

Here’s what I think. I see evidence of soul-sapping alienation everywhere I look. These pilgrims come from the western world, from countries that have generally high standards of living. In many cases, they have everything that money can buy, but it’s not enough – and from a global perspective it’s TOO MUCH. Our consumer addictions are stripping the planet of its magnificent resources.

Money doesn’t buy happiness. Material things don’t satisfy our deepest yearnings. And though we know it, the undertow of a consumer culture (and the emotional havoc it stirs up) is often too powerful, even for the reasonably prudent. Even for the thoughtful and caring.

A pilgrimage journey – a pause from the rat race of contemporary life – promises a chance to recalibrate, to align body, soul and spirit. To take stock. Many pilgrims are looking for a chance to find a different path, a more intuitive and authentic path. A path that circumvents the riptides and undertows of a globalized world on the brink of absolute insanity.

The fact is, we’re ALL pilgrims if we're seeking a better path, even if our feet never leave the community where we were born. My friend on the Camino understands this. In a recent post here’s what she had to say:

Buen Camino everyone! I have been so encouraged by your notes, thoughts and prayers and I thank you! However I would like to turn the tide and commend each of you on your own Caminos that you trek each day! Wherever you are, moment by moment and step by step, with every paper you write, phone call you make or demand you meet, you also are on the Camino; leaning on the strong arms of God for guidance, wisdom and strength!! Sometimes the road is flat and endless; other times steep and rugged... But you keep going! To you all I say 'Buen Camino' and 'Que Dios te bendiga!' (May God bless you!)

This is profound, Sam. (I assume it's Sam?!) We had a Somali woman who visits family in one of the refugee camps in Dadaab speak to our church women, and sadly she says life there is still very tough, especially for the women and children who get the leftovers after the men. UN food supplies have diminished over the years, and she says they just get a little rice, oil, flour and water I believe. There is much rape and abuse as well. They very much need our prayers and help.