Whatever happened to Judeo-Christian values?

Thomas Hobbes (1588-1679) famously asked "how is social order possible?", the question which laid the foundation for the development of sociology as a distinct field of social scientific inquiry. He speculated that in a state of nature people would always act to further their own interests and this would produce a society characterized by a "war of all against all". To avoid such a state, humans negotiate social contracts and impose on the natural state constraints that produce a "civil society", regulated by governments of one kind or another.

Thus, citizens of a particular society learn to orient their actions according to a moral code. In previous posts I've talked about the difference between shame-based and guilt-based cultures. Canada is an example of a guilt-based culture; China is an example of a shame-based culture. In both cases the point is to constrain the behaviour of individuals so as to ensure that social order is maintained. And both systems presume the socialization of individuals according to the moral standards necessary for the smooth functioning of the society. In guilt-based societies there are clear penalties for breaking the rules. We have sophisticated criminal justice systems to determine the guilt or innocence of anyone accused of breaking the law, and we have other less formal ways of enforcing our moral standards. 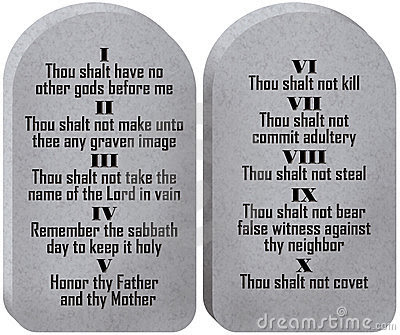 And what are the moral standards you ask? Well, simply put, they are a modern articulation of the ten Commandments. We all know that we ought not kill, steal, lie or cheat. We should treat others as we would like to be treated ourselves. We should keep our word and we should tell the truth. We should take responsibility for our actions and we should be fair and just, even in the face of injustice. Such are the things that we teach our children. And when we are successful, our society hums along smoothly.

In shame-based cultures, there is a similar moral code which prescribes "right" behaviour, but the emphasis is on how things appear. What is actually the case is less important than what appears to be the case. Where we - from a guilt-based culture - might argue that it matters less what people "think" than what actually is the case, in a shame-based culture, what people "think" - the appearance - is actually more important. This may seem to be a minor difference but it has significant implications in the nitty gritty of everyday life, especially when people from different cultural orientations are working together.

A few days ago news broke of evidence that cycling superhero, Lance Armstrong, was not only guilty of using illegal substances to bolster his own performance, but was also the key figure in a sophisticated doping ring that impacted many other riders, including eleven teammates who have now testified against him. Lance Armstrong's accomplishments are legendary: while his most notable claim to fame is winning the Tour de France seven times, he did so while also battling testicular cancer and he has established a foundation which has raised 500 million dollars to fight cancer. Even in the midst of the most recent testimony against him, proponents argue that Armstrong has done a lot of good and should therefore not be vilified because of his alleged doping infractions. In other words, even though it appears that Armstrong has broken the moral code of our society by lying, cheating, and stealing (at least insofar as his cheating has robbed other athletes of success), what happens when a society decides to overlook those violations of our moral code?

Some might argue that we have always done this - that is, make exceptions for people whose net contribution to our society is such that we are willing to overlook their shortcomings. But at what point do we make so many exceptions that the rule no longer holds? I'm concerned that our moral compass has literally lost its bearings. The basics - telling the truth, being who we appear to be, being accountable for our behaviour, etc. etc. - simply do not seem to be "written in stone" any more. Reality tv is full of shows that are re-wiring our moral compass. Coming out on top is what counts. Lying is perfectly acceptable - even admirable - if it helps you win the prize. We have adopted - it seems - a "survivor" mentality. And that's the very mentality that Thomas Hobbes argued would produce a "war of all against all" and social chaos. Hm. Let's check our own bearings and be careful of those influences that might lure us away from them...