There are lots of things that I’ve forgotten from my high school science classes but one thing that has stuck with me is the proposition that for every action there is an equal and opposite reaction - Newton's third law of motion. 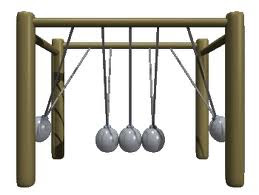 There are lots of everyday examples: you hit a ball with a bat and the distance the ball travels depends on how hard it was hit, the angle, the wind conditions; you ride a skateboard and use your foot to propel the skateboard forward; an airplane pushes back on the air and the air pushes forward on the plane. One thing leads to another in predictable and inevitable ways.

Since 1687 when Newton published the three laws in his work Philosophiæ Naturalis Principia Mathematica, these laws have helped us to understand and predict the effects of objects acting on one another.

There is a sort of comfort in the predictability of objects. And as much as I might like surprises and the adrenalin rush that comes from successfully navigating random circumstances - the curve balls of life - I realize that everyday life would be totally overwhelming were it not for a degree of predictability. But having said that, I am so incredibly thankful for the unpredictable and even the chaotic. The things that come at us out of the blue. I suppose that we have an innate tendency to want to maintain balance - or, if thrown off balance, to regain it.

Life wouldn't be much fun if everything was predictable, routine, according to plan. I sometimes worry that heaven - a place where there is no sin or sorrow or suffering - might actually be a little boring. It's hard to imagine a place or time when people will always act with integrity - always do the right thing for the right reasons and in the right way - and the outcomes will always be such that they don't produce pain or suffering, for anyone. I don't actually spend much time thinking about that though, because life at this moment is a long way from that. A very long way.

Life in the present moment is riddled with unpredictability. People act and react out of all kinds of motives - some selfish and others quite philanthropic. Our actions have impacts that we can't possibly even trace, let alone predict.

When the French philosopher, August Comte (1798-1857) first used the term sociology, he had in mind that this new science would identify the natural laws governing social behaviour. The search for these laws, however, has proved futile. When it comes to the social world, Newton's third law of motion - for every action there is an equal and opposite reaction - is clearly NOT applicable. The reaction may be neither opposite nor equal to the initial action. In the social world, all bets are off. What may seem like a negative outcome, may, in the long run actually prove to be have a positive impact, and vice versa.

The ancient Greek philosopher, Heraclitus, said that "you could not step twice nto the same river." In other words, even though you may go down to a river at the same time every day and step into exactly the same spot, neither the river with it's flowing water, nor you with your ideas and attitudes, can be exactly the same. The social world is always changing!

Another French sociologist, Emile Durkheim (1858-1917) argued that society is equal to more than the sum of its parts. Sociology became the social science that is concerned with that nebulous field of the "more" - the ever changing, shifting, sometimes incredibly beautiful and sometimes immensely ugly "more". The interstitial spaces between philosophy, history, economics, psychology, anthropology, political science, etc.

For those who like predictability and certainty - those who like things to be well ordered and neat and tidy - sociology must surely be incredibly frustrating. But for those who thrive on the edges of uncertainty - who love seeing the complex web of uncontrollable, rogue variables - the sociological study of society is immensely gratifying.

I am a sociologist. I'm also a person of profound faith in a triune God who, it seems to me, is also equal to more than the sum of the parts. Father, Son and Holy Spirit are not simply three unique beings who share one mind and one throne. And the reality that they preside over is not two dimensional and systematic. As the river is ever changing, so too is our reality as we make our way through the maze of physical, social and spiritual life on a capricious planet. God's grace is new every day because our need for grace is in constant motion.

Many Christians have an uneasy suspicion of sociology. I suspect that they may be the very Christians who prefer to define and defend a God who they have reduced to the level of complexity that they are comfortable with, which frankly, isn't much. They're people who don't like the messiness of a world where it's hard to tell with any degree of certainty what will happen as a result of their actions, or the actions of others. They're likely to be people who will opt for programs with proven results, rather than to boldly (even recklessly) act on the principles of conduct described so eloquently in the Beatitudes and the Sermon on the Mount (Matthew 5-7).

This new way of life was taught and modelled by a Messiah who, when the chips were down, overcame the very real temptation to opt for safety and security and as a result, found himself on a cross with only his vision of another world - a more just world - to sustain and comfort him. Greater than the physical agony of a brutal death was the spiritual anguish of being wrenched from the trinity and left on his own - a solitary figure, beaten and ridiculed - but ultimately not destroyed.

If Newton's third law of motion were applicable to the actions of men then we might expect that the crucifixion of Christ would be countered in his resurrection - an equal and opposite reaction. And I suppose that there are those who see it this way. But I believe that the resurrection of Christ has a magnitude of impact that is far greater than we can even imagine, let alone understand. It was a game changer in that it opened the door to a whole new dimension - a reality where the separation between God and man is bridged and we, mere mortals, are invited to live by the principles of a different Kingdom and in the presence of the King, eternal, immortal, invisible (1 Tim. 1:17).

When Christ ascended, he took his place (once again) in the trinity, but more than that, he declared that we are eternally united with him as joint heirs of the Kingdom (Romans 8:17). No wonder Paul urged the Ephesians (and us!) to live a life worthy our our calling!

I was recently asked what happens to us after death. Do we sleep until the resurrection or do our souls go to be with God and Jesus in Heaven in the intermediate time? We are not told clearly in the Bible, but your quote of Romans 8;17 is an assurance that we will receive the inheritance God has for us.