From Starfish to Whales: When Rescue Efforts are Viewed with Suspicion 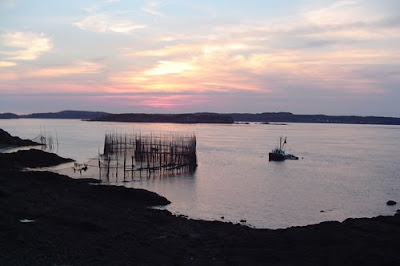 In the last post I talked about the little boy who rescued the starfish which had been stranded by the tide. Yesterday I participated in a whale rescue – or I should say, attempted whale rescue. REALLY – I did! My husband and son are commercial fishermen. Amongst other things, they catch juvenile herring in weirs – you would probably recognize them as sardines (an excellent source of calcium and omega 3, by the way!).

Weirs are large stationary traps – they cover about an acre of ocean floor – and they catch herring by being strategically placed in the “fishways” of the herring. That is, over the years, fishermen study the local habits of the herring and then build weirs which are literally “in their way”. According to the tide and the dark and daylight hours, the fish swim in schools into the weir where they find themselves trapped. For the most part the heart shape of the weir keeps them from finding their way out as they circle around and around.

Of course fishermen often catch things in their weirs besides herring – mackerel, dogfish, squid, the occasional blue fin tuna or shark. Seals appreciate the weirs because they provide them with captive meals and snacks virtually 24 hours a day. Rarely, but on occasion, a whale will also find itself inside a weir. They swim in, often oblivious to their surroundings, as they feed on herring or on krill – the small particles for which our area is noted and which make it a productive fishing area.

Years ago fishermen saw a whale in the weir as a minor nuisance and if it didn’t swim out on its own, it was likely to be shot or harpooned and unceremoniously towed out to deep water or to a beach somewhere. That was before whales became endangered and before our fascination with them spawned a cottage industry in whale watching. It was also back in the day before the environmental movement and the emphasis on recycling - back in the day when fishermen threw their pop cans and trash into the ocean. Now, most fishermen most of the time are much more environmentally responsible.

So, a few days ago my husband returned from tending the weir – that is, checking it for herring - with the news that there was a minke whale trapped in the main weir. Minkes are small whales, usually 18-25 feet long when they're mature. The main weir is the part the fish swim into initially. If conditions on the ocean floor permit, the weir will also have a “pound” or holding area. Fish that are caught in the main weir will be “seined” into the pound where they can be held until there’s market – that is, until the one sardine processing company (Connors Bros.) can send a carrier (large boat with a hold for transporting fish to the plant). I realize as I write this that for many of you, this is a whole new language!!

I love watching whales so naturally I was delighted to hear that I would have a chance to visit one at my leisure. My husband was less pleased, having just finished the spring lobster season – two months of 80-90 hour weeks. Nonetheless, yesterday – while others were participating in Canada Day celebrations - we set out around 10am to “free” the whale. My husband and son were in one skiff and my 80 year old mother-in-law and I were in another.

It was a stunning summer day - the kind that makes me wonder why anyone would want to live anywhere else. The weir is only a few minutes from the wharf – it’s REALLY beautiful here by the way! Any hope that the whale might have rescued itself was abandoned as soon as we got to the weir and saw it surfacing.

The rescue plan was for us to encourage the whale to swim out of the mouth of the weir by using a combination of noise – the two outboard motors – and a seine – a net used for getting herring out of the weir when there’s market. The challenge is to be firm but not intrusive. The last thing you want is a panicked whale swimming in a tight space. I won’t go into the blow by blow details. I’ll just summarize by saying that we got the whale out of the main weir – after a tense moment when we were convinced that it had actually drowned on bottom, caught between two stakes. But I neglected to mention that part of the weir construction is what’s called the “wing” and the “wing” is designed to corral the herring into the main weir. Part of the wing is called the “hook” and unfortunately, in this case, the deepest water is in the hook. Naturally that’s where the whale wanted to be.

The next challenge was to get the whale out of the hook, down the wing and to freedom, NOT back into the weir. After several failed attempts at this – we’d get him (or her - I have no idea) out of the hook and once he even got clear of the wing but in order to get to open water he had to swim over a shallow place – a “ledge” – and despite our earnest reasoning, he simply didn’t trust us and was frustratingly persistent in his efforts to return to the hook.

After several hours all told, my husband decided to wait until the tide conditions would help us to help him by giving him more water in which to swim over the ledge. Another important detail is that where we live there's about 28 feet rise and fall of tide which means every 6 and 1/2 hours the tide rises or falls 28 feet (which is very impressive!).

The happy ending to the story is that when my husband went back about 4 hours later, he was able – singlehandedly (well that is, with his skiff) to gently push the whale over the ledge by circling behind him. So all in all, it’s fair to say that I participated in phase one of the rescue.

All that to say that I couldn’t help thinking of some similarities and differences between rescuing stranded starfish, this minke whale and humanitarian aid and development in developing countries.

I guess technically the whale didn’t NEED our help. He was just in the wrong place – from the fishermen’s perspective - since a herring weir isn’t going to catch herring when there’s a whale in it. But the fact is, we wanted to help it get out of the trap it was in to open water. We wanted to do it good. To set it free. It, however, had other ideas.

It didn’t trust us, didn’t particularly like us and it wasn’t impressed with our efforts or our intentions. I’m not sure exactly where I’m going with this… but the thing is, it resorted to its instincts for survival. Those instincts might have worked in some circumstances – or even in this circumstance, given enough time. And in a state of nature, there wouldn’t BE a weir in his way. Similarly, if we substitute local knowledge and cultural heritage rather than instinct, people in African countries, for example, have been perfectly capable of solving their own problems – at least when they are in situations of their own making or even when faced with natural events.

But human intervention or “progress” being as it is, we could say that global realities – economic and political and even environmental – have put obstacles in their way. Trade policies, reckless environmental impacts of decisions made by large corporations who don’t answer to African governments (or maybe even to their own national governments!), economic and political strings...all conspire quietly to frustrate their efforts at sustainability. Then humanitarian aid and development workers come into their country and want to help them escape from their poverty traps. Is it any wonder that they might be a bit suspicious?

Is it too much to suggest that perhaps their scepticism is warranted and that resisting our “help” may actually be a prudent course of action?

I’m also conscious – and uncomfortable – as I write this that I am portraying people in developing countries as somehow less advanced than we are. I realize that for the sake of the analogy I am casting US in the role of benevolent fisherman (or little boy in the case of the starfish) and THEM as helpless starfish or confused whale. This is, I’m sure, an unfortunate but almost inevitable bias – part of our ethnocentrism.

I don't want to make too much of this, but again, I'm just thinking through what it means to be engaged in aid and development. I'm not suggesting that we stop trying to do good - only that we do it with great care and compassion and a realization that we CAN do harm, even when we don't intend to. Hey - if it's THIS complicated for me to explain the relatively simple procedure for getting a whale out of a weir, think how much more complicated is the life of peoples in countries and cultures half a world away... or across the street in some cases.