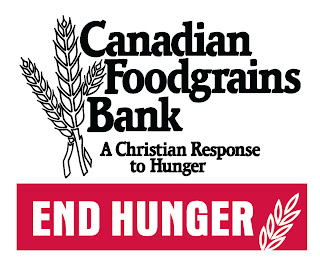 As promised at the end of my last blog, I'm going to tell you about the Coronation Grow Project that raises money - LOTS of money - for the Canadian Foodgrains Bank (CFGB). It's a story about some farmers in Alberta - in Coronation, to be precise - who share CFGB's vision: a world without hunger.

These farmers plant a 270 acre field and the entire harvest is donated to CFGB. Not only that, but through a 4:1 matching grant from Canadian International Development Agency (CIDA), that money is multiplied. Last year, the Coronation Grow Project was able to raise almost $3,000,000 for CFGB - all money that is used to fund food security projects in low income countries. In this case, the money was deposited in Canadian Baptist Ministries' (CBM) account with CFGB and used by CBM for projects with partners in Africa, India, Central and South America.

But let me back up a bit and tell you about CFGB. This year is CFGB's 25th anniversary. Here's how the website describes CFGB:

Canadian Foodgrains Bank is a partnership of Canadian church-based agencies working to end hunger in developing countries by: · increasing and deepening the involvement of Canadians in efforts to end hunger; · supporting partnerships and activities to reduce hunger on both an immediate and sustainable basis; · influencing changes in public policies necessary to end hunger.

Check out the website at: http://www.foodgrainsbank.ca. But there's more to the story. Last year, Lorne Park Baptist Church in Mississauga, Ontario, partnered with Brownfield Church in Alberta. As I understand it, the farmers - many of them from the Brownfield Baptist Church, near Coronation - provided the knowledge, labour and equipment to make the harvest a success, and the Lorne Park Church provided cash for input costs. So - an urban church (Lorne Park) partnered with a rural church (Brownfield) - each contributing what they had in order to raise an enormous sum of money so that people in distant lands might have access to funds that would help them develop projects to ease hunger and food insecurity.

Just think of all the players involved in making this happen: the farmers and the local community folks in Alberta, the Lorne Park folks, CFGB, CBM and The Sharing Way (CBM's relief and development arm), CIDA (which contributes money through matching grants - that's money gathered from Canadian taxpayers), our partners in Kenya, Rwanda, Angola, India, Bolivia and El Salvador. That's a lot of people, working together, to ease hunger!

Now - before I leave you I want to mention a website you might want to check out as the Advent season begins: http://www.adventconspiracy.org/. Enjoy!